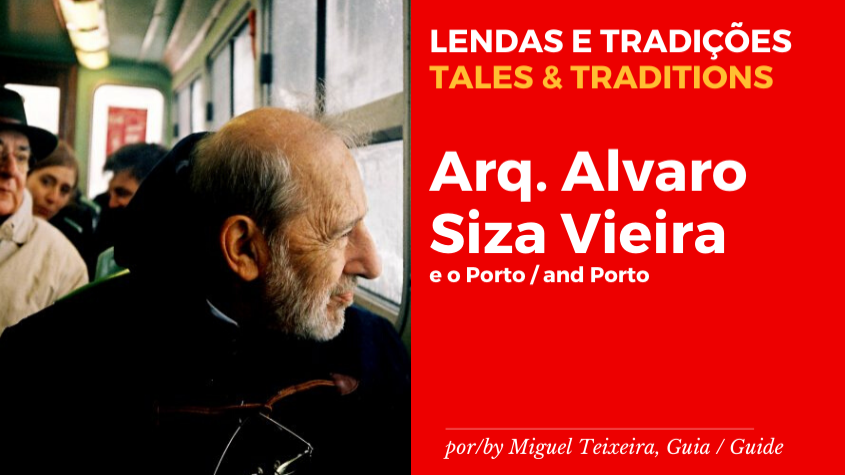 Álvaro Siza Vieira and the city of Porto

One of the most notable architects in the whole world, widely renowned for its extensive

work present in several continents and countries, Álvaro Siza Vieira has his signature in

the city of Porto.

Born in Matosinhos in 1933, Siza has studied architecture at the Fine Arts Superior School of Porto between 1949 and 1955.

He would become the most prominent pupil of his master and teacher Fernando Távora,

the father of Modern architecture in Portugal, to whom he worked as assistant architect.

Siza would later also become a teacher at the same school.

Admirer of the works of Alvar Aalto, Adolf Loos and Frank Lloyd Wright, his practice would be marked by the language of international Modernism, as well as by a thorough study and deep respect for the Portuguese constructive tradition.

He would though develop his own architectonic language, revealing an outstanding ability to not only reinvent himself but, especially, to reinvent and reinterpret with great  success and personal refinement the language of Le Corbusier, the great reference of Modern Architecture.

Siza consolidated a tradition that defined a school and is still today followed by the socalled School of Porto, becoming himself its major reference.

In 1992 Siza Vieira was awarded the Pritzer Prize, by the Hyatt Foundation, the highest prize to distinguish an architect in the world. He was given the prize following the project of renovation of Baixa/Chiado, in the heart of Lisbon.

Amongst countless works in Porto and the surrounding territory, some should be highlighted for the architecture lovers visiting the town, as follow.

The Boa Nova Tea House, built on the beach rocks in front of the sea, it’s his first notable work and a principle statement. In 1958 Fernando Távora won the competition for this project. Witnessing the passion and commitment of his young assistant he decided to give him the project on his own.

Two steps away, also built on the natural rocks of the sea line of Leça da Palmeira, north from Porto, is the Tides Swimming Pool (1961-1966). It is the only Portuguese building included in the book “100 Buildings: 1900–2000” by Thom Mayne, selected by some of the greatest names of contemporary architecture such as Tadao Ando, Zaha Hadid and Kazuo Sejima, all Pritzker winner such as Mayne also. This book is considered a canon of the world architecture from 20th century.

The Swimming Pool of Quinta da Conceição (1958-1965), is also very close, beside the industrial harbor of Leixões, also at Leça da Palmeira.